“There can be no keener revelation of a society’s soul than the way in which it treats its children.”

The MAGIC Charities Foundation: Our Story

MAGIC began as an idea. An idea formed by Steve Grosso in a hotel room after the birth of his daughter. After months of the adoption process, the big day had finally come. A baby girl was born and a new family was formed. Deep in the thought of how life was about to change and also deep in the thought about the angst and the process the birth mother had endured, Steve thought about how children come into this world in different circumstances. Not all children are born into a family of means to care for even their most beloved little ones.

This idea of MAGIC, Making a Great Investment in Children, arose again two years later as Steve found himself in Russia adopting once again. The visit to the orphanage to meet that beautiful baby boy. The joy of this blue-eyed bundle that was now his son paired with the heartbreaking goodbye in the orphanage – leaving while other little ones waived goodbye and waited for their someday family. Shouldn’t all of these children be given the same opportunity? The opportunity to have a loving family, a home, to be healthy and receive a good education? Yes. Yes. Yes!

Years later, with two little ones of her own, Sharon Grosso began working as a guest teacher in classrooms with special needs. There she learned not only of the challenges that some children and families face making it through a day in the “mainstream” world of education, but of the difficult circumstances in which many children lived. While teaching in a classroom where almost all children qualified for free breakfast and lunch, the realization occurred that buying food was a financial hardship for some families. For those who packed lunch, the meals were often dismal at best. One day while guest teaching so a teacher could prepare for conferences, it became apparent that not all parents would attend. Family circumstances such as a grandmother struggling to raise her grandson while his father was in prison and a stretched mom unable to take time off from work painted a picture of how hard it was for some caregivers to meet simple, day-to-day needs.

After four years guest teaching, Sharon ran a service project for three years partnering with a local organization serving the homeless in Bucks County . While serving community meals, families and children arrived regularly. Watching a small, grass roots organization make a difference to so many families and children in need motivated Steve and Sharon to begin the official steps to form the MAGIC Charities Foundation.

They gathered a group of family, friends and colleagues and shared their vision and mission… and were delighted to find a wonderful, talented group to help them with their own grass-roots endeavor.

The mission at the MAGIC Charities Foundation is to advocate for and invest in the well-being of children to create a world that, above all, values our children’s health, education, safety and family relationships.

There is no time like the present.  Make an investment in a child’s well-being today! 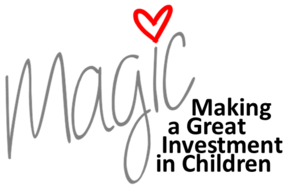